In 2019, the top milk producing states in the USA were Idaho, Wisconsin, California, New York and Texas. Between these 5 states alone, 50% of the entire country’s milk was produced. Almost 220,000 million pounds of milk was produced in the US in 2019 alone.

Dairy cows have a laid-back life of grazing, sleeping and ruminating, which is chewing the cud. Cows in some dairy farms will live on a diet of grass grazed from pastures. Other farms will feed prepared fodder called “sillage”, grains or hay to the cows that live in close quarter pens called Confined Animal Feeding Operations also known as CAFOs. A large CAFO can hold many thousands of animals. Dairy farms will also employ hormones and antibiotics to their herds throughout the rearing process to protect their health from infectious diseases and ensure the cows will produce a great quantity of milk. Holsteins are the no. 1 type of dairy cow used in the US, these are the black and white variety depicted in the image below. The brown cows in this image are Jersey cows; along with cross bred cows, Jersey cows are also common dairy cows. There were a total of 9,336 milk cows in operation in the US in 2019 and each cow produced 23,391 pounds of milk in the same year. 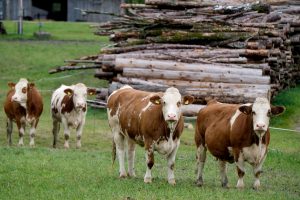 When the cow’s udder is full it is time for her to be milked. The farmer has a fair amount of control and flexibility when it comes to choosing their milking times. Cows are typically milked in the early morning and then once more in the later afternoon. While it is possible to milk cows by hand, the task of hand-milking an entire herd of cows would be too much for anyone to do twice in one day. Before the invention of modern milking machines, the farmer would perform this laborious task by hand squeezing the teat between the thumb and forefinger. Many people continue to milk their cows by hand. Machine-Milking Cows can be milked twice a day. With the help of a machine, this entire process takes only about 5 minutes for a cow, depending on the type of machine being used. Most dairy farms have installations for as many as 20 cows to be milked at one time. The milking machine features a small cup that imitates the sucking action of a young calf and this causes milk to be released from the udder. Robotic milking.

Once the whole milk has been approved for use, it is stored in large silos where it will be pasteurized, homogenized and separated for further processing. Pasteurization: The milk must be heated to a specific temperature and this temperature must be maintained for a specific amount of time before it is cooled. This must be done with allowing the milk to become contaminated. Homogenization: To ensure that the fat is well separated throughout the milk, the milk is then passed through and atomizer. This prevents milk from floating to the top of the container. Separation: Centrifugal force is then used to separate the cream. After they have been separated, the milk and cream are remixed to ensure a perfectly even fat content is achieved for each type of milk desired. To create whole milk, fat is returned to the milk at a ratio of 3.25%. For low fat milk this ratio is reduced to a mere 1%. For nonfat, or skim, milk the ratio is well below .05%. Further Processing: Further processing may include ultra-high temperature treatment which significantly increases storage life. Milk can also be cultured or mixed to create yogurt and other dairy products.

How Does VPS Server Compare To A VPN Server?

Why Financial Hardship Letter is Helpful for Medical Needs

How Does VPS Server Compare To A VPN Server?

Why Financial Hardship Letter is Helpful for Medical Needs